In its early days the AVO method has been seen as a potential golden bullet for exploration prospect de-risking. Nowadays - and a lot of dry wells later - we know that there are many possible situations where geology can generate traps for those interpreting AVO anomalies too naively.
Nevertheless AVO and its successors and improvements have greatly changed our understanding of the subsurface. Using pre-stack inversion and anisotropic imaging we can now better characterise the subsurface. Especially in a development environment where a lot of well control is available, this can lead to great enhancement of characterising the inter-well space. Temporal changes in seismic amplitudes recorded by time lapse seismic can be related to production effects and integrated in the reservoir simulation. Amplitude variation with azimuth and angle bears the potential to characterise the properties of the fracture network so important in many reservoirs.
So despite the slight disillusionment after the first euphoria in AVO interpretation, the quantitative interpretation of seismic amplitudes bears great potential for future subsurface characterisation.
In this course we will start from a solid understanding of the basics, but we will go on to review further developments, starting from elastic impedance, over pre-stack AVO inversion and the use of amplitude variations with azimuth for estimation of anisotropy that can be used in imaging and fracture characterisation. 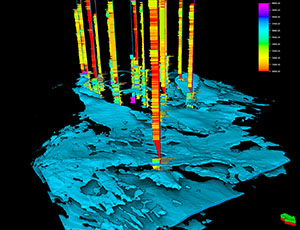 Designed for you, if you are...

How we build your confidence

The benefits from attending

By the end of the course you will have a good understanding of the possibilities and limitations of amplitude-based quantitative seismic interpretation. With that foundation you will feel confident to: